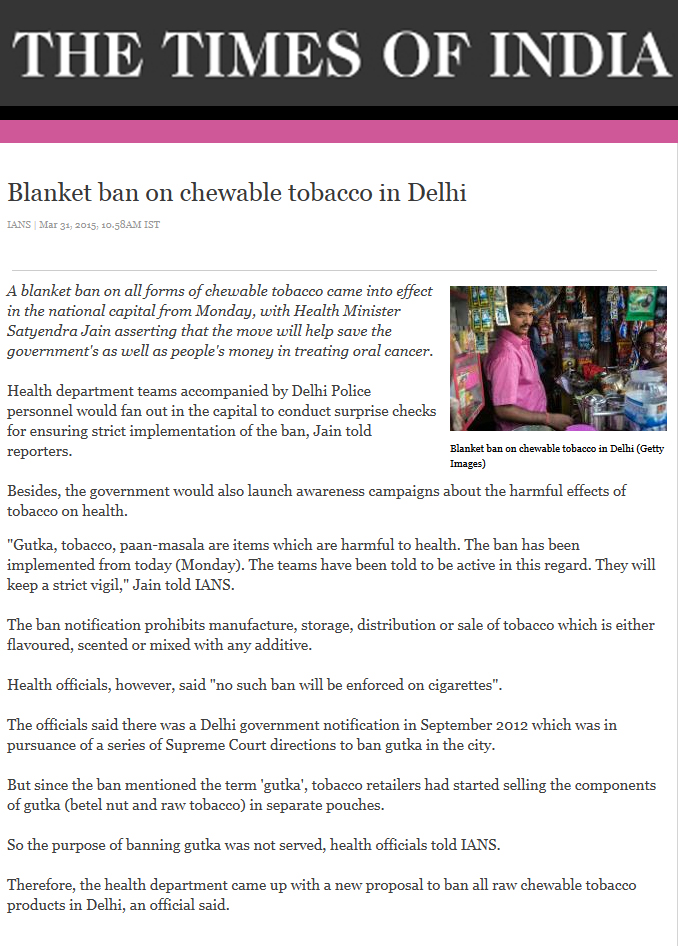 A blanket ban on all forms of chewable tobacco came into effect in the national capital from Monday, with Health Minister Satyendra Jain asserting that the move will help save the government’s as well as people’s money in treating oral cancer.

Health department teams accompanied by Delhi Police personnel would fan out in the capital to conduct surprise checks for ensuring strict implementation of the ban, Jain told reporters.

Besides, the government would also launch awareness campaigns about the harmful effects of tobacco on health.

“Gutka, tobacco, paan-masala are items which are harmful to health. The ban has been implemented from today (Monday). The teams have been told to be active in this regard. They will keep a strict vigil,” Jain told IANS.

The ban notification prohibits manufacture, storage, distribution or sale of tobacco which is either flavoured, scented or mixed with any additive.

Health officials, however, said “no such ban will be enforced on cigarettes”.

The officials said there was a Delhi government notification in September 2012 which was in pursuance of a series of Supreme Court directions to ban gutka in the city.

But since the ban mentioned the term ‘gutka’, tobacco retailers had started selling the components of gutka (betel nut and raw tobacco) in separate pouches.

So the purpose of banning gutka was not served, health officials told IANS.

Therefore, the health department came up with a new proposal to ban all raw chewable tobacco products in Delhi, an official said.