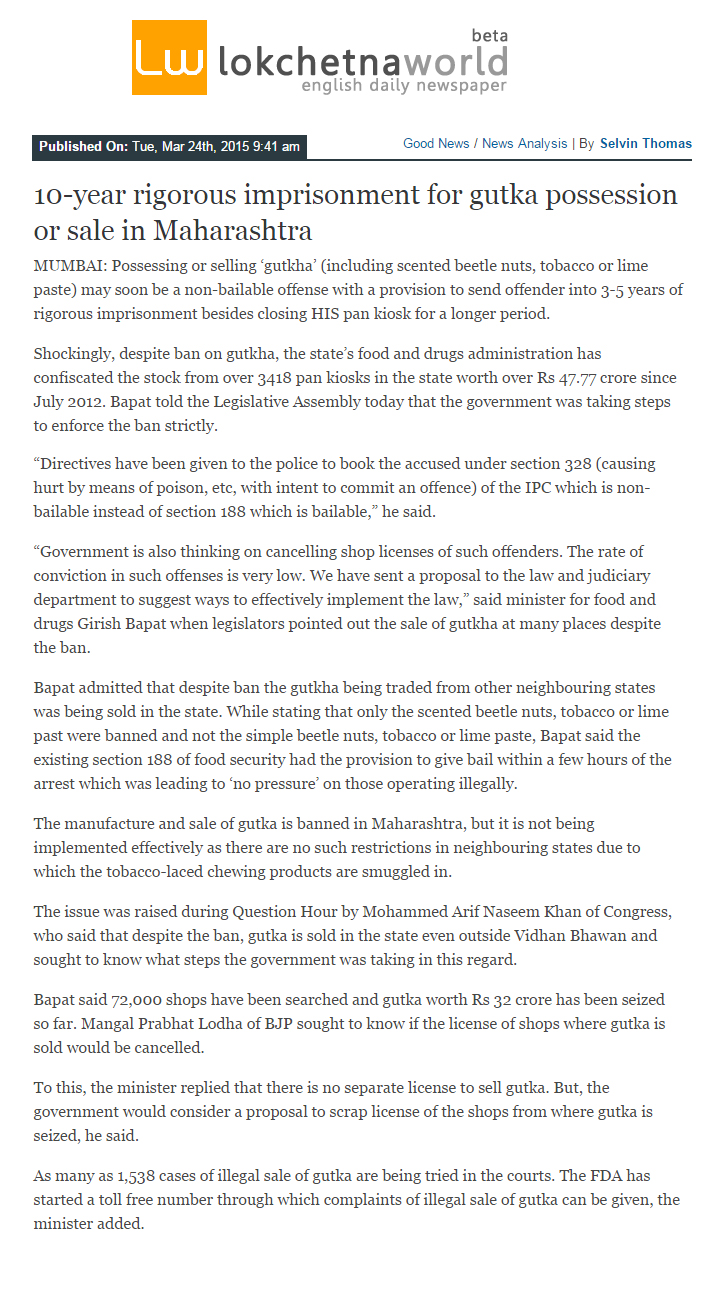 10-year rigorous imprisonment for gutka possession or sale in Maharashtra

MUMBAI: Possessing or selling ‘gutkha’ (including scented beetle nuts, tobacco or lime paste) may soon be a non-bailable offense with a provision to send offender into 3-5 years of rigorous imprisonment besides closing HIS pan kiosk for a longer period.

Shockingly, despite ban on gutkha, the state’s food and drugs administration has confiscated the stock from over 3418 pan kiosks in the state worth over Rs 47.77 crore since July 2012. Bapat told the Legislative Assembly today that the government was taking steps to enforce the ban strictly.

“Directives have been given to the police to book the accused under section 328 (causing hurt by means of poison, etc, with intent to commit an offence) of the IPC which is non-bailable instead of section 188 which is bailable,” he said.

“Government is also thinking on cancelling shop licenses of such offenders. The rate of conviction in such offenses is very low. We have sent a proposal to the law and judiciary department to suggest ways to effectively implement the law,” said minister for food and drugs Girish Bapat when legislators pointed out the sale of gutkha at many places despite the ban.

Bapat admitted that despite ban the gutkha being traded from other neighbouring states was being sold in the state. While stating that only the scented beetle nuts, tobacco or lime past were banned and not the simple beetle nuts, tobacco or lime paste, Bapat said the existing section 188 of food security had the provision to give bail within a few hours of the arrest which was leading to ‘no pressure’ on those operating illegally.

The manufacture and sale of gutka is banned in Maharashtra, but it is not being implemented effectively as there are no such restrictions in neighbouring states due to which the tobacco-laced chewing products are smuggled in.

To this, the minister replied that there is no separate license to sell gutka. But, the government would consider a proposal to scrap license of the shops from where gutka is seized, he said.